The continental free trade area CFTA in Africa came in place to achieve the following objectives:

• Create a single continental market for goods and services, with free movement of business persons and investments, and thus pave the way for accelerating the establishment of the Continental Customs Union and the African customs union.
• Expand intra African trade through better harmonization and coordination of trade liberalization and facilitation regimes and instruments across RECs and across Africa in general.
• Resolve the challenges of multiple and overlapping memberships and expedite the regional and continental integration processes.
• Enhance competitiveness at the industry and enterprise level through exploiting opportunities for scale production, continental market access and better reallocation of resources. 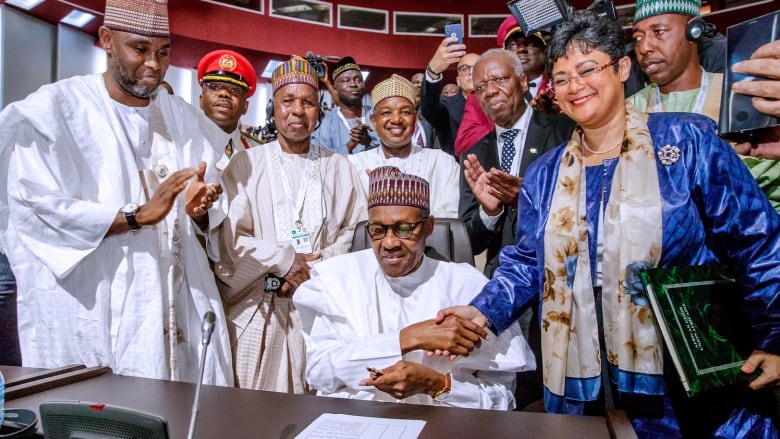 The agreement was brokered by the African Union (AU) and was signed on by 44 of its 55 member states in Kigali, Rwanda on March 21, 2018. The agreement initially requires members to remove tariffs from 90% of goods, allowing free access to commodities, goods, and services across the continent. The United Nations Economic Commission for Africa estimates that the agreement will boost intra-African trade by 52 percent by 2022. The proposal was set to come into force 30 days after ratification by 22 of the signatory states. On April 2, 2019, The Gambia became the 22nd state to ratify the agreement, and on April 29 the Saharawi Republic made the 22nd deposit of instruments of ratification; the agreement went into force on May 30 and entered its operational phase following a summit on July 7, 2019.

“The eyes of the world are turned towards Africa,” Egyptian President and African Union Chairman Abdel Fattah al-Sisi said at the summit’s opening ceremony.

“The success of the AfCFTA will be the real test to achieve the economic growth that will turn our people’s dream of welfare and quality of life into a reality,” he said.

Africa has much catching up to do: its intra-regional trade accounted for just 17% of exports in 2017 versus 59% in Asia and 69% in Europe, and Africa has missed out on the economic booms that other trade blocs have experienced in recent decades.

Members have committed to eliminate tariffs on most goods, which will increase trade in the region by 15-25% in the medium term, but this would more than double if these other issues were dealt with, according to International Monetary Fund (IMF) estimates.

The IMF in a May report described the free-trade zone as a potential “economic game changer” of the kind that has boosted growth in Europe and North America, but it added a note of caution.

“Reducing tariffs alone is not sufficient,” it said.

13 Money Mistakes You Must Avoid If You Want To Be Successful
IDENTIFYING AND ESCAPING POVERTY.
Gym masturbator caught in the act in Stellenbosch South Africa, banned for life
22 Most Interesting Mugabe Wisdom To Activate Your Brain.
7 Reasons Why Africans are Poor and How to be Rich in Africa!
27 Best Quotes Of The Month From Robert Mugabe and Julius Malema
Chaos as pastor who is having sex with married women in church gets chucked out
To Develop, Africans Must Change Their Mindset
TOP 5 SIGNS YOU WILL BE WEALTHY ONE DAY DESPITE YOUR PRESENT FINANCIAL STATUS
5 Things You Need To Do For A Financial Breakthrough
Spread the love

IDENTIFYING AND ESCAPING POVERTY.
Two Laws Of Finance You Must Understand To Succeed
Robert Mugabe Wisdom Quotes Of The Month
Chaos as pastor who is having sex with married women in church gets chucked out
27 Best Quotes Of The Month From Robert Mugabe and Julius Malema
8 Mistakes Every Lady Wants Her Man To Stop Making
Russian President Vladimir Putin Challenges Africa With The Bitter Truth
13 Money Mistakes You Must Avoid If You Want To Be Successful
TOP 5 AFRICAN FIRST LADIES WHO CHEATED ON THEIR HUSBANDS
22 Most Interesting Mugabe Wisdom To Activate Your Brain.
Translate »